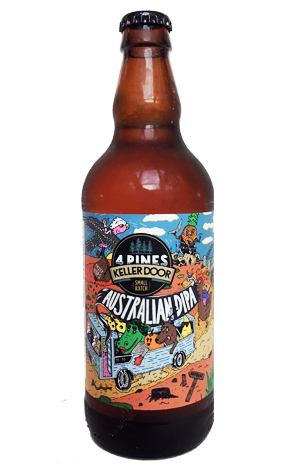 There's so many things this write up should probably open with. That this Keller Door release bridges the before and after period in 4 Pines' history – brewed before they sold to AB InBev and released afterwards. Or that it's got an off-the-wall label you could spend an age examining and pondering. Perhaps its size (note to self: look out for words like "double" on labels when selecting a knockoff beer...). But instead all we could think of was how much it looked like Tizer when it hit the glass in the last of the evening sunshine. Gleamingly and glisteningly bright and with a vivid orangey-red hue.

Still, it doesn't take long for the beer to put any confusion to rest; there's nothing soft about it. It's 9 percent ABV's worth of Aussie hop-stuffed double IPA. On the hop front, you've got Enigma, Vic Secret and Galaxy serving up pineapple and tropical aromas and flavours, while Helga and Willamette (two hops that will no longer be grown by Hop Products Australia) add an earthiness underneath. They're used in such volumes, there's a heavy, almost dank thing going on too – not to mention enough booze to prickle your palate and warm your noggin – all wrapped up by a pithy, grapefruit like, resinous bitterness that relentlessly stalks you down like Mick Taylor.

Indeed, consumption led to a reevaluation. Maybe it's not Tizer it looked like but Irn Bru, the feisty fellow sugary pop famously "Made in Scotland from girders".