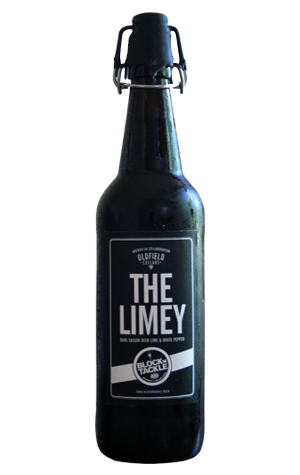 After a slow start – at least when compared with many other populous parts of the country – the fortunes of beer drinkers on the NSW Central Coast have been changing for the better in recent years. Slowly but surely new breweries have been opening up and bars and bottleshops have been getting tempted into craftier waters, never to look back. To further encourage this collective pursuit of better things, two of what you might call the new breed, the Block n Tackle brewery and Oldfield Cellars, have teamed up on a beer – and a slightly unusual one at that.

Named The Limey, it’s a dark saison that’s been bastardised with the addition of lime zest and white pepper. On the nose it’s the pepper that comes through and gets lifted by the saison yeast while the lime zest would appear to have been added in a generous dose because it sings, zings and lingers long on the palate, making it both refreshing and interesting. But there’s something dark (besides the colour) to this beer too, an almost chocolatey malt character which gives it plenty of depth and ensures there’s balance with the fruit and spice characters. While there’s no sweetness to speak of, it comes across as something you could serve up with, or perhaps in place of, dessert at a fancy restaurant – the kind with oversized white plates and colourful morsels drizzled with potent reductions. The Limey may not be to everyone’s tastes but it will be to plenty and, if nothing else, should do absolutely no harm to the chances of a followup collaboration.