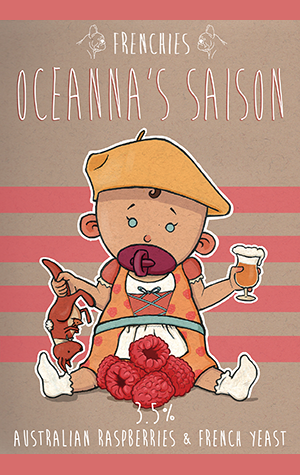 Back in 2014, when he was head brewer at the Flat Rock Brew Cafe, Vince de Soyres brewed Flynn’s IPA, a beer made for and named in celebration of the birth of his son. In due course Flynn got a sister, Oceanna, but Vince wasn't working in a brewery at that time so she missed out on an honorary beer. Skip further ahead and Vince recently got a third child, of sorts, in the shape of the Frenchies brewery. And that meant he could finally make a beer in Oceanna’s name.

The one she got is a dainty little raspberry saison. It’s built on the lightest of light pilsner malts which has allowed the colour form the infusion of raspberries to come through and render it a pastel pink colour. On the nose the raspberry aromas are pronounced and suggest there’s sweetness to follow, yet on the palate there’s no room for anything even close to saccharine. Where it differs from most saisons is that it doesn't throw forward a notable yeast character and that helps it come across as an extremely clean beer, where the flavour pierces like an arrow and finishes dry, with the raspberries adding a little tartness and further contributing towards an overall refreshing feel. At just 3.5 percent ABV you get the impression the beer is like its namesake, a bundle of complexity contained in a neat little package.