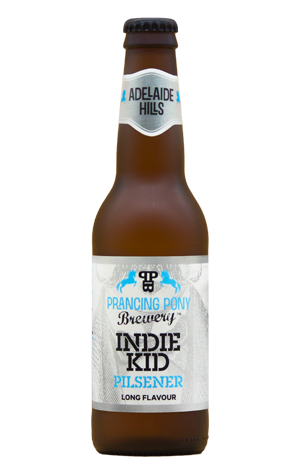 It's getting harder to know how much faith to put into professions of independence in the beer world these days, as bigger businesses with deep pockets look to buy themselves credibility and a slice of the growing craft beer pie. Yet independence is just one thing SA's Prancing Pony is looking to celebrate with its Indie Kid Pilsener; the Kids of the title is a nod to their investment in a couple of apprentices while the beer is also the first to roll off a newly installed bottling line.

As for the beer, it's one with which they've looked to bridge Old World and New, combining traditional European hops with bolder contemporary varieties. That said, this is no punchy NZ pilsner firing aggresive hop aromatics into your olfactory system, more a beer in which the New World varieties add a touch of citrus character and a more resinous bitterness to the softer, herbal stylings you'd expect from a Euro pilsener.