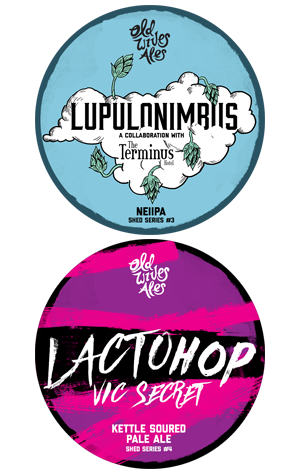 With more and more Australian breweries making New England style IPAs, it should come as little surprise that the words “Imperial” or "Double" should start making their presence felt alongside the letters NE and IPA. Such is the case with Old Wives Ales’ take on the style, with the Melbourne brewery brewing an 8 percent ABV NEIIPA in collaboration with the Terminus.

Lupulonimbus pours a cloudy orange with a big, aromatic hit of citrus coming from the combo of Ella, Vic Secret and Mosaic hops. Flavour wise, there’s a restrained, slight bitterness you expect from such beers, one that quickly gives way to juicy mandarin and tropical fruit flavours.

It's not the only new Old Wives Ales beer hitting taps around Melbourne this spring either. Lactohop is the foursome's latest dalliance with lactobacillus, here appearing in conjunction with a single hop, Vic Secret. Often single hop beers seem brewed with homebrewers in mind due to their ability to showcase the character of different varieties and, considering this brewing company was started by longtime homebrewers who were all members of Melbourne’s Merri Masher, perhaps they wanted to give a little something back.

For any homebrewers who want to know what lactobacillus does in a single hop beer, Lactohop would be a good place to start. The souring bacteria delivers zesty lemon and lime, which seems to help bring out a similar flavour profile from the Vic Secret hops which, in turn, layer on tropical fruit to complement the tartness. Underpinning it is a combination of pilsner malt and wheat providing a smooth texture to this pale and hazy drop.

And select other Victorian bars