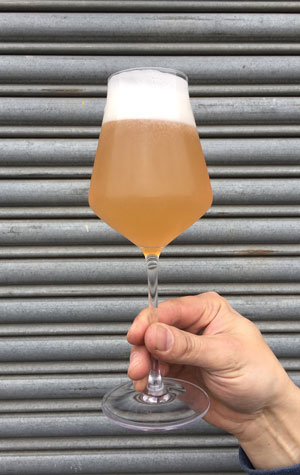 On a recent visit to La Sirène's brewery, it's fair to say we were taken aback by one beer. OK, so there were plenty of tasty beers sampled that day but one that was pulled from the tank packed an unexpected amount of pizzazz. It was the Belle D'Orange, so named because it started out as the brewery's Belle French ale before spending 11 months in French oak with a stack of whole Navel oranges for company.

Once drawn from the tank where it was undergoing final conditioning before release, you could have convinced drinkers it was a cocktail. For a start, it has the look of a Bellini to it, while the combo of age, oak and the macerated oranges has created the sort of intense citrus hit you'd expect after a mixologist has given some orange peel a flick and a twist over your glass before handing it over the bar. Zesty, juicy and alive, it was quite the experience. You can watch brewer Costa talk about it here too.