Beer Australian Brewery & Bucket Boys If You Like Pina Colada 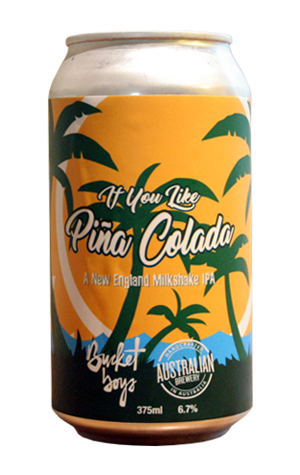 New England IPAs are passé; all hail the hazy cocktail IPA… For their second collaboration, The Australian Brewery and Bucket Boys have thrown caution to the wind and released a beer under the banner of a New England Milkshake IPA. For those unfamiliar with the hazy IPA trend that’s been both sweeping and dividing the beer world of late (presumably those people who call home the underside of a rock), the concept of a milkshake beer probably sounds only slightly more appealing than drinking the liquid that collects at the bottom of your garbage bin. But there’s merit – and plenty of differing methods – behind the apparent madness, with some of that innovation on show here.

The name, If You Like Pina Colada, drops a pretty strong hint as to where this beer takes its inspiration and it also does a rather good job of delivering what it promises. In turning the famous rum-based tropical cocktail into a beer, the brewers began with Citra and Mosaic hops and a Vermont yeast before adding coconut, pineapple, vanilla and lactose, all of which come through in the end product.

Addressing the milkshake part first, it’s a turbid affair and the lactose – a sugar found in milk – offers a notable creaminess and sweetness; indeed, if you’ve a low tolerance for sweetness you might feel tested by the time you get to the bottom of the glass, but for anyone else there’s no such trouble. Sweetness plays an important part in the beer, working alongside the pineapple and the hops to add to what's a whopping tropical fruit hit while also helping shave the sides off any bitterness. With the coconut flavour coming in beneath and also boosting the creaminess, there’s a lot going on and you feel the balance could tip as easily as one of those little cocktail umbrellas. But it all remains as in tune as Rupert Holmes in the 1979 classic and gives new meaning to the idea of a desert island beer.