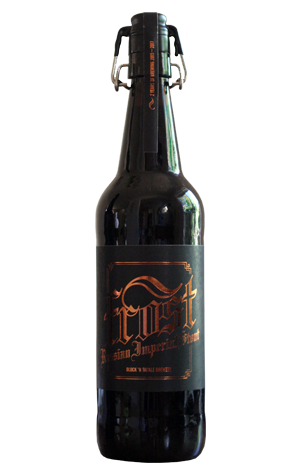 The release of the second anniversary beer from Block ’n Tackle could be seen as the sign of a brewery hitting its stride. The Central Coast business has faced more than its share of hurdles over the past two years, but they’ve battled through each one and appear to have come out the other side in fine form. This is a place that’s gotten by, in the main, by making fairly approachable beer styles and serving them to locals directly from the brewery. But it’s noticeable how the envelope is being pushed, with beers appearing slightly further afield, closer ties being established with local businesses and more involvement in events outside the brewery. And the beers themselves are becoming more ambitious too – case in point is The Limey, a fine dark saison with citrus and spice made with fellow local beer lovers at Oldfield Cellars.

It’s into this environment that Block ’n Tackle welcomed the second vintage of its annual Russian Imperial Stout: Frost II. The new beer is named in honour of George Frost, a legend of the local shipbuilding scene that once flourished in the area where the brewery now resides. His shipyard was a source of local prosperity, building a number of vessels from the late 1800s onwards that continue to be immortalised in the names of other Block ’n Tackle beers.

The 2017 vintage of Frost is something of an upgrade on the first, a chance to tweak the original recipe and iron out any perceived kinks. And the fine tuning based on a year of thinking has been worthwhile, turning down the ABV a touch but still turning out an impenetrably black beer that’s rich and robust. The malts offer ample roast characters up front with generous sides of chocolate and coffee, while sweet fruit character gets balanced out by a solid bitterness. But, ultimately, nothing pulls too hard in any direction which allows it to keep its bigness balanced.

Breaking from the brewery’s regular branding, Frost is packaged with a striking metallic font on a jet black, wax sealed bottle which makes a statement on the table. And it’s something that should continue to do so for several years, with the robustness and bottle conditioning lending itself to plenty of cellaring potential.