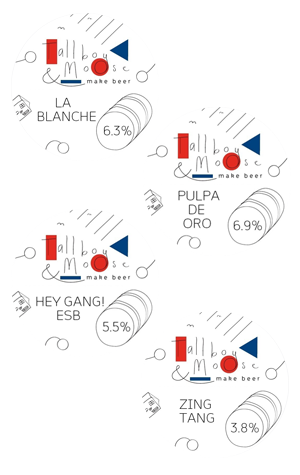 It doesn't seem that long since we last rounded up the new releases from Tallboy and Moose but, clearly, it's been long enough for them to release four new beers... La Blanche is only their second dip into Belgian waters, a witbier of sorts, albeit bigger and fuller in body than most. You'll pick up soft lemon citrus and low, slow spices, not to mention a surprisingly peppery kick tucked in behind the sweet pale malts.

Pulpa De Oro is something like their fifth NEIPA variant in a year, one that features El Dorado from the US as its main hop with Motueka, Centennial and Amarillo in supporting roles. It's deeply hazy, although not as murky as some, with flavours akin to an icy pole made from freshly squeezed Jaffa oranges and a leaner sweep across the palate than the more breakfast juicy beers of the style out there.

From New World frontiers to Old World sock 'n' sandal beers with Hey Gang!, a pretty straight down the line ESB. The Bramling Cross hops are used as much to clip the edges of the toffee, nutty malts as anything, although add a touch of earthiness too, while the last of the current foursome couldn't be further removed.

Zing Tang is a dry-hopped kettle sour featuring kaffir lime and lemongrass new US hop Lemondrop. There's sherbety lime and lemongrass aromas and an experience on the palate that brings back memories of those flying saucer lollies that would dissolve into a burst of lively sugary sweetness, all underpinned with a touch of soft acid.

All on tap at Tallboy and Moose and some also found at the linked venues and a handful of other Melbourne bars including: