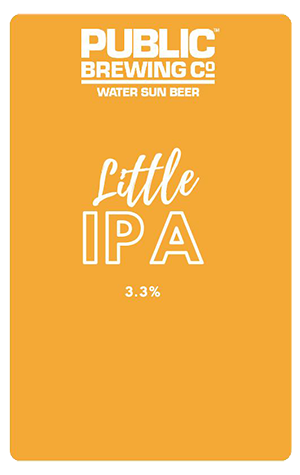 The Public Brewery in Croydon decided early on to put energy into designing a light beer that would satisfy their desire to offer a sensible option over the bar while delivering an impact that would satisfy those looking for something approximating a bigger crafty beer. The Feather Weight has gone on to do that for them, finding its way onto many a beer list as the light option too. And now they've come up with a mid-strength that aims to do similar, albeit ratcheted up a few notches.

It's pale as, with a simple malt base there to do little other than carry the American hop varieties – Amarillo and Centennial. It's lean as too, with its lemon, citrus and pine aromas making a beeline straight for your upper nostrils, joined by a touch of sherbety sprightliness and no little bitterness on the palate. It's been pouring at their venues a while and is now going out on wider release.