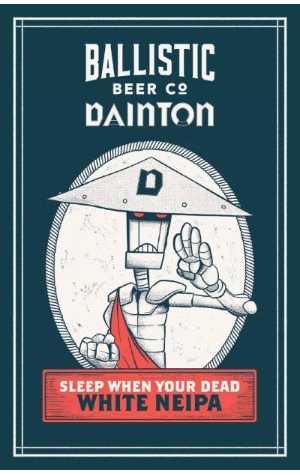 Will it ever end? (Hopefully never, cries the growing legion of hazy IPA fans that, as of this weekend, includes me mum.) Yes, time for another NEIPA and another one that comes with a twist. That is possesses the latter should come as little surprise as Dan Dainton is involved; the brewer of the current Champion Australian Craft Beer entered the NEIPA arena with a beer featuring rye and blood orange and here has joined forces with another critically acclaimed brewer, Lachy Crothers of Brisbane's Ballistic Beer Co. The pair decided to take the fruity, hazy style and give it an added layer of yeast-derived fruitiness by finishing it off with a German hefeweizen yeast.

There's "a heap of oats" in there too for added rotundity, while a little whirlpool hopping and far more dry-hopping (using Galaxy, El Dorado and newer variety Ekuanot) were designed to give the beer "a super juicy flavour". According to the brewers, the hefeweizen yeast was chosen to add banana to "the already intense fruity hop aroma and flavour". Liquid fruit salad fans, this is one for you.

And selected bars around Brisbane and SE Queensland