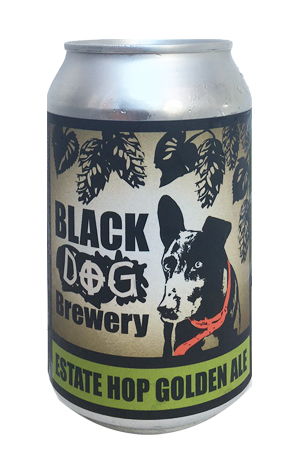 Clearly, Black Dog brewer James Booth doesn't like having time on his hands. Not only does he brew and package every Black Dog beer and also act as the winemaker on the fourth generation family winery Taminick Cellars, he decided to start growing his own hops a few years back. He's used them in a couple of beers before, most notably an Estate Hop Saison; in 2017, he decided to put three varieties – Cascade, Chinook and Columbus all handpicked and added fresh – into a simpler beer, this Estate Hop Golden Ale.

And it's a combo that's worked out a treat, with the hazy little number awash with fresh hop aromas, particularly heaps of soft melon. There's plenty of juicy melon, soft citrus and tropical flavours in there too, atop a gentle biscuity base, in a beer that's a cut above – and fuller in body – than your common or garden golden ale.