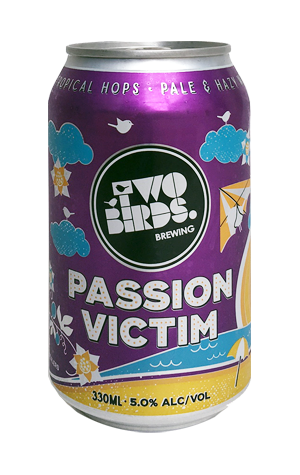 Helped in no small part by the success of Stone & Wood's Pacific Ale, hop derived passionfruit characteristics have, it's fair to say, become rather popular in beer. And, with summer approaching, Two Birds has decided to send its most passionfruity beer out into the world, combining the Galaxy hops that make Pacific Ale what it is with a couple of citrusy, fruit salady US hops (Mosaic and Amarillo) and, just to be sure, some passionfruit puree.

It's a combination that has Passion Victim, the brewery's second tinnie, making a beeline for the Eski at your next barbie, picnic or festival trip. And, once it's been there, chilled, and been cracked open, what have you got? Apart from a good-looking can in your hand, you've got a beer that's lighter on the palate than its 5 percent ABV and the addition of puree might lead you to expect. Passionfruit leads the way, joined by some lemon citrus aromas and flavours in a beer with a slightly tart and dry finish. Summery, in other words.

Now making its way to WA, SA & QLD too