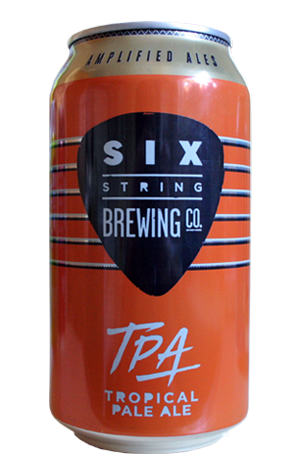 When they first opened the doors to their brewery, Six String had a bit of a tough time selling the virtues of craft beer to their local market. There was simply no precedent to the kinds of flavours they were planning on making in and for their community; the Central Coast was certifiable lager land and here they were starting out with a relatively strong, dark red IPA as their flagship. Yet things have changed. Yes, they’ve managed to help a lot of people become interesting and accepting of the kinds of flavoursome beers they like to make, but equally they’ve taken a more pragmatic approach to offering beer that doesn’t offer such a challenging starting point; case in point is the Coastie Lager, a beer which was made as a Central Coast only beer but which became so popular it joined the core range and is now distributed far and wide.

The Tropical Pale Ale sits firmly in the same category. It was brought into the range in mid 2017 at the same time they overhauled their branding and can design, sitting as an approachable midway point between the lager and the regular pale ale. When poured into a glass the aroma delivers exactly what it promises on the tin, with a generous head bursting with pineapple and passionfruit characters. But on the palate it isn't the a straight and sweet fruit salad you might perhaps be led to believe. Instead, it’s more about the grapefruit and citrus characters which lead into quite a pronounced bitterness. At just 4.2 percent ABV it fits well within the realms of being a summer quaffer for which it was obviously intended.