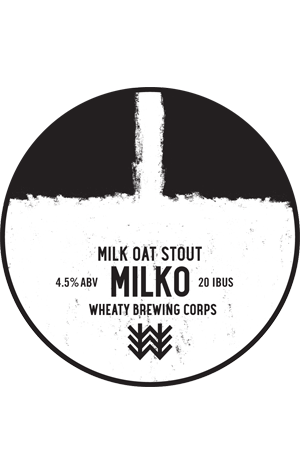 When deciding what sort of sweet stout to brew next, head brewer Jade Flavell drew inspiration from the Old El Paso taco advertisement. She couldn’t decide if she wanted an oatmeal or a milk stout, therefore decided: “Why not both?” The idea was to combine the sweetness from the lactose in a milk stout with the body of an oatmeal stout, bringing in an English ale yeast to finish the job.

The Wheatsheaf Hotel has the ability to pour a beer up to three different ways, with standard CO2 carbonation, with nitrogen or through their hopinator, the glass tower used to add extra flavours before the beer reaches the tap. For the Milko Milk Oat Stout, these variations change the beer into three very different drinks. The beer in normal form is jet black with a chocolaty brown foamy head. There's a pleasant mix of sweetness from the lactose and roasted grains both aroma and flavour wise. The oats assist in bolstering the body in what's a fairly easy-drinking with a bitterness conjured by roasted barley, dark crystal malt and Magnum appearing right at the end. Try the nitro version and you'll gain an added creaminess and silky mouthfeel.