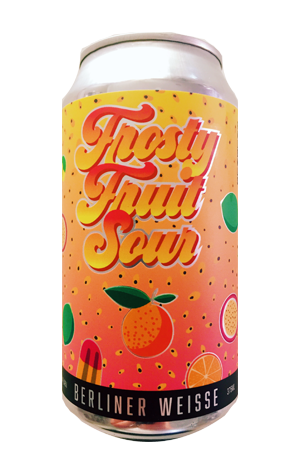 Frosty Fruit's pre-summer release from this trio of collaborators blends these two warm weather joys into a lightly puckering passionfruit, mandarin and lime gelato infused nostalgia trip that raised plenty of smiles and recalled memories at its Perth launch.

A cursory glance might view this as gimmicky opportunism – a gelato made by two of the three added to a beer brewed by the fourth. However, Chicho Gelato has been crafting some of the most deliciously artisanal, new wave gelato since 2013, after studying at Gelato University Carpigiani, Bologna. Serial collaborators Mane Liquor know a thing or two about beer having been thrice rated as Australia’s best bottleshop and Cheeky Monkey’s ascendance as a serious beer player continues on the ground and in the sky.

At 4.4 percent ABV, the Berliner Weisse base beer is a little boozier than typical for style, but any concerns soon fade as the lime and mandarin deliver a citrus fruit hit. Passionfruit is muted in the beer, even though it's most prominent in the gelato, while the beer's zippy characters encourage more sips. All up, the broad appeal of Frosty Fruit Sour, woven with childhood nostalgia, makes this an entertaining and curiously quaffable beer that could easily become a flagship release for the brewery.

For comparison, the passionfruit, mandarin and lime sorbet was available from Chicho Gelato at time of writing too