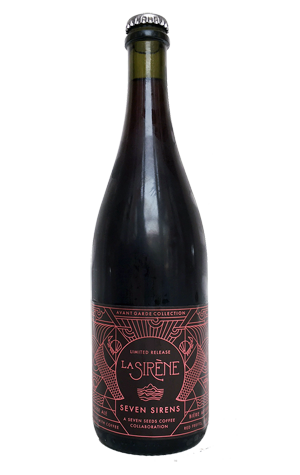 There must be something in the air this spring, this being the third coffee beer with a difference to come our way in less than two weeks. This time around, it's one that's been a long time in the making, with near neighbours La Sirène and Seven Seeds coffee roasters building towards this collaborative release in stages. Having decided to work together on a beer, they first held a structured cupping session to select an appropriate coffee, landing upon a range from Honduras (from a micro-lot from the Matazano Farm, grown in the mountains of La Paz Honduras by coffee producer Francisco Castillo, for any coffee geeks out there). Next was a session to decide on the right blend of beer and coffee; three coffee infusions hot and cold side of the brewing process were trialled until they were happy.

What they ended up with is a take on the brewery's sour red ale and a beer that's unlike anything else we can remember encountering in the seven-plus years of The Crafty Pint. It pours a lovely blood orange/chestnut colour from which soft, rounded fruity coffee aromas lead off, supported by red berries and hints of rich orange. On the palate, there's a cleansing acidic character underpinning the sweeter elements, while the coffee – presumably in conjunction with the specialty malts – takes on a mocha quality alongside the lighter fruity flavours.

It really is a quite unique beer, managing to conjure thoughts of wine on one side, iced coffee on the other and Ribena in the middle without any of them feeling out of place.

And other select good beer outlets