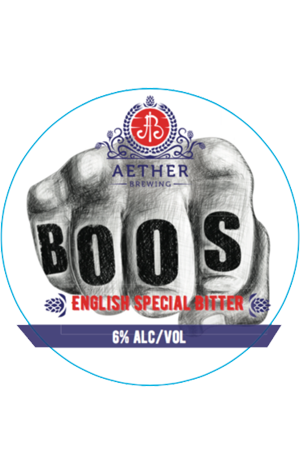 You don’t have to spend long around Jimmy Young of Aether Brewing to hear him utter the word, “BOOS!” It’s one of those exclamations (is it a word? is it a sound effect?) that’s hard to define, but usually makes sense in context.

It’s an apt name for this English style bitter, which always makes a whole lot of sense when you’re knocking it back, whatever the context. The two row base malt does all the heavy lifting, bringing the smooth caramel and toffee flavours you’d expect from an English bitter. You may even notice a little raisiny sweetness showing up before the bitterness joins the party, then hangs around long after everyone else has gone home.

BOOS is the first Aether beer recipe created by Jimmy (with Dave Ward being the head brewer), which adds a little weight to the bronze award it picked up at 2017's Craft Beer Awards.