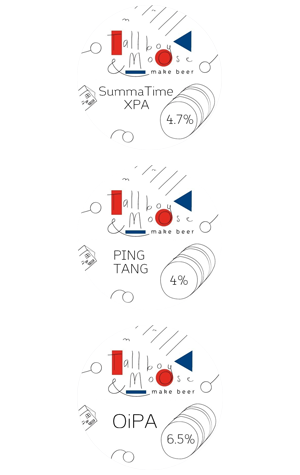 Still no messing at Preston brewpub Tallboy & Moose where they've got three new beers on tap right now (as well as at a few other Melbourne venues). One is SummaTime XPA, a beer designed with the next Crafty Pint blind tasting at the brewpub mid-December in mind. We're going to be looking at New World style pale ales – essentially taking the American pale ale concept but layering on Aussie and Kiwi hops and, usually, featuring less booze and bitterness. And this beer achieves those goals, with in your face tropical fruit, lime and mandarin aromas and matching fruity flavours so upfront they come across as pretty sweet – even though the brewers tell us it's technically dry. The hops in there are Vic Secret, Motueka and Riwaka and the result is lean and clean with little bitterness.

Also on tap is another fruity number, albeit a candy kinda fruit that brings back childhood memories of the garish yellow, sherbety chewy sticks on offer at pick 'n' mix lolly shops. Ping Tang packs a massive candied grapefruit aroma (well, there is grapefruit juice, peel, pulp and a sprinkling of sumac in there), with the impact lessened slightly on the palate by the gentle acidity derived from kettle souring. At 4 percent ABV, it's a perfect start-to-your-second-day-at-a-festival beer.

The last of the current trio is OiPA, described as their Oat Pale Ale dialled up to IPA territory. It's not big IPA territory, however, even at 6.5 percent and with Simcoe, Vic Secret and Dr Rudi hops at play, more an easy-going IPA. There's pineapple, juicy fruits and pine, some softness on the palate from the oats and a reasonable, though not OTT (particularly in the current hazy climate) bitterness.

And a handful of other Melbourne venues