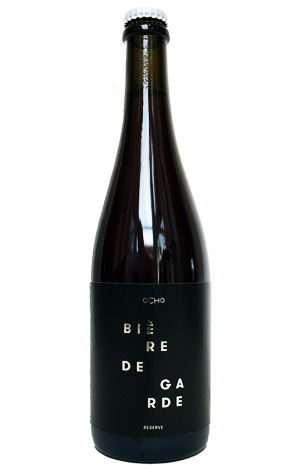 The final days of spring 2017 saw Tasmania's Ocho Beer release the first of its Reserve series: barrel aged beers in 750ml bottles that have always been founder and brewer Stu Grant's intended direction. The first of the two we sampled was Imaginary Ale, a blended saison, with the beer accompanying it this Bière de Garde.

Those who've been following Ocho from the early days will have had a brush with the beer before – in a manner of speaking – as it started out as A Fox In The Cellar, the rich, malt led farmhouse style ale released last year. The beer has since spent ten months on French oak before being bottled with Brettanomyces, the idea being to replicate the "accidental inoculation" that likely occurred with many such beers when they were first brewed.

The latter processes have certainly changed the original into something quite different, a coyote to the original Fox, perhaps. The aromas at first conjure thoughts of cocktails: there's macerated cherries and brown sugar, not to mention something distinctly plum like on the nose too. There are flavours of cherry and bitter chocolate, some Christmas spice too, in a beer that's smooth on the palate and which, for all the rich, sweet elements described, still manages to finish dry as anything.

Stu tells us only 600 bottles were produced and that he fancies it standing up to cellaring for two to five years.