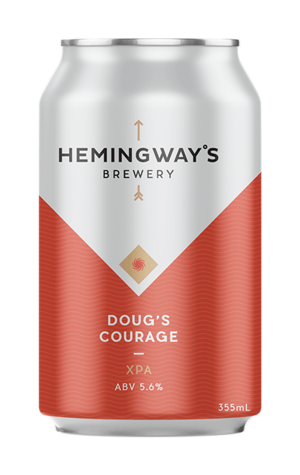 Doug’s Courage IPA celebrates the spirited nature and fortitude of the Port Douglas pioneers. Tagged as an XPA, it sits apart from most of its peers on the market these days; while many brewers have decided XPAs should be in Balter's image – very pale, hop forward, and somewhere around 4.5 percent ABV), Hemingway's have gone bigger (a legacy, perhaps, of its original categorisation as an American IPA).

For one, it pours a dark copper colour, which translates to a light caramel sweetness on the palate. The brewers have held little back when it comes to the hopping, with Columbus, Citra and Cascade added in liberal fashion, contributing a lively bitterness plus aromas and flavours that flit from sharp citrus to diesel, nettles and onion.