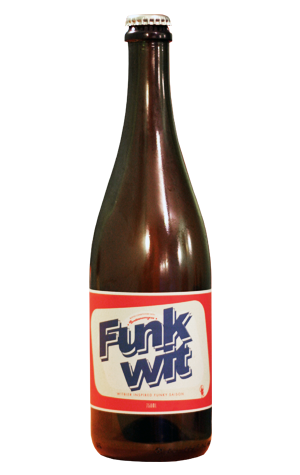 The final shenanigans from Shenanigans in 2017 appear to be exercises in tying up loose ends.

Earlier in the year they released the impressive Brettanomyces focused saison Grisette Superieur then backed it up in short order with the almost-hopless and highly floral Flower Power. They’ve looked to both of those themes, and offered more than a little nod to last year’s delicious White Sky, to bring us the Funk Wit. What we end up with first is a witbier that’s been zested with mandarin, dosed with coriander, planted with jasmine, spiked with saison yeast then topped up with Brettanomyes – and it delivers on every front. You get all the freshness of the citrus and and the flowers and the spice which are lifted by the saison esters and both complimented and contrasted by the Bretty farmhouse funk. The brewers reckon this is the kind of beer that'll be a bit of a journey in bottles, with the upfront freshness apparent upon the beer’s release slowly giving way to the Brett over time. That suggestion means it could be well worth grabbing two bottles while you can: one for now, one for later.

For their wider release summer seasonal they’ve gone back to grisette, a style which has served them so well over their three-plus years of commercial brewing, and brought out the India Session Grisette. This style/non-style – a typically tongue in cheek effort to bring more catchy beer acronyms to the table – is essentially an advancement of their love for grisette and a desire to see how else they could adapt the style to the modern market. So, what we have is a Belgian inspired summer ale that’s been loaded up with Citra, Galaxy, Riwaka and Simcoe hops to form a beer that pairs light farmhouse characters and esters with tropical fruits and a refreshing, dry finish. And being a modern beer, it’s available in cans too.