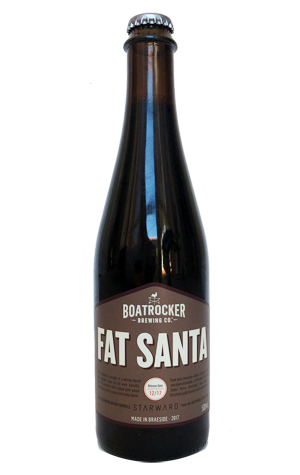 The romance between Boatrocker and the makers of Starward whiskies shows no sign of abating. Thanks to the success of Ramjet, the collaboration between the Melbourne producers is one of the most high profile in the local beer world and, for Christmas 2017, they've returned to the style with which they began – a whisky barrel aged imperial stout – and then amped things up from there. Yes, really. Because, clearly, straight Ramjet isn't decadent enough for Christmas...

Thus Fat Santa merely started out being aged for six months in Starward barrels (that had previously held red wine) before being racked onto whole coffee beans, vanilla beans and tonka beans. The idea was to end up with a beer featuring "all the things that Santa loves" and has resulted in something that makes it easy to see why he carries such a big gut around on his sleigh. It's a boozy dessert in a glass: whisky, dark fruits, chocolate fudge, vanilla, almonds, coffee... Essentially, it's the imperial stout equivalent of being asked if you'd like one more round of pudding when you're already about to burst your belt on Christmas Day and then, under duress of grandma's pleading eyes, shrugging and going: "OK then, if you insist..."