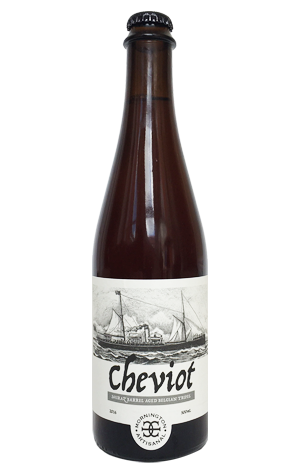 Back in the middle of winter, we held a Crafty Cabal event in the Barrel Room at Mornington Peninsula. The brewery had not long launched its barrel program, AKA Mornington Artisanal, with Old Pumping Station, a beer that made our end of year Best New Beers list. Guests were given pretty much free reign of the brewery – tank samples, cellar stock, the last mini-keg of this year's Imperial Stout and so on – with one of the treats an early taste of a tripel that was being lined up as a later Artisanal release. It had already been in shiraz barrels for months at that point and was to spend longer still – ten in total – before being judged ready for release.

It's now left the brewery in time for Christmas and, like its forebear, is a luscious, creamy affair. The barrels' former tenant makes its mark, with some prominent shiraz grape aromas and oak leading the way. There's much to be found amid its pillowy body too: berries, brown sugar, fresh leather, macerated fruit and something we're going to call "unlit cherry tobacco cigar". There's a bit of backend heat (it is nearly 10 percent ABV) but not enough to put you off diving in as deep as you can go.