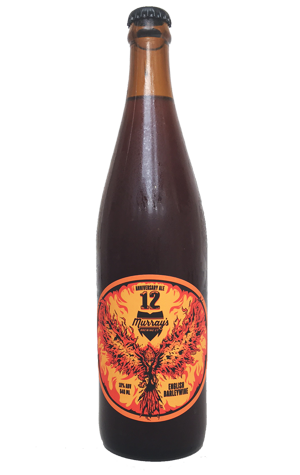 When the story of Australian craft beer comes to be told, Murray's deserves to be recognised as one of the country's true pioneers. While some of their peers and many far younger brewing companies enjoy more hype these days, take a look at what the NSW brewery has done since launching at the Pub With No Beer and it's an almost unmatched legacy. Whether it's big, hoppy beers such as the Icon 2IPA and Spartacus Imperial IPA, outrageously good imperial stouts such as Heart of Darkness (particularly the oak aged version) and Wild Thing or the vast array of Belgian style beers – from delicate saisons to beasts like Hell Of The North – there's little Murray's hasn't done and done with panache.

And then there's the Anniversary Ales, beers released at the end of each year since the brewery launched. Typically, a barley wine of some form or other and usually weighing in between 10 and 15 percent ABV, they've spent time in barrels, featured blends of Belgian yeasts and at one stage played with Brettanomyces years before most drinkers had a clue what it was.

For version 12, it's another 10 percent ABV English style barleywine brewed to mark the opening of their new venue, just over a year after the old cellar door burnt to the ground. Locally sourced oranges were added to a beer that also spent months on oak staves. They reckon it will cellar for up to a decade, with time likely to allow the beer to soften and fatten. If you tuck into it now, you'll find a beer that's pretty tight for its size, Olde English Marmalade like flavours and bitterness, a treacle like fortified malt sweetness, rich, stewed fruits and a touch of warmth too.