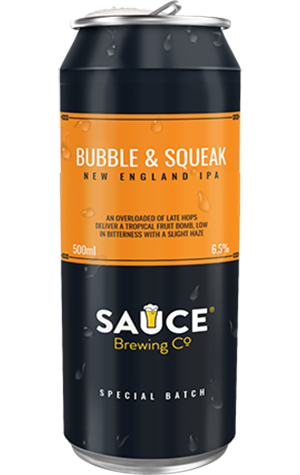 When Sauce first opened to the public, the brewery wasn’t actually 100 percent ready to welcome the public in. Sure, the team had been working towards it but, as they stood there late one Friday afternoon, they were still sweating on some critical council paperwork. So, when it arrived at more or less the eleventh hour, the place still had more than a few edges in need of smoothing; the beer garden was still mostly a gravel pit, the bar wasn't decorated and the canning machine wasn't commissioned so they had no takeaways to offer. But they did have the most important thing: a functioning bank of taps and a full range of beers to pour. And when you have beer the rest seems to matter less.

Throughout that opening weekend and the subsequent few, the beer that proved the most popular (by virtue of that most empirical verdict of being the first to be drunk dry) was a keg-only New England style IPA. So it’s little surprise they chose to bring it back again and, for good measure, gave it the large format tinnie treatment too.

Hazy in appearance and delivering an otherwise mashed up fruit melange on the nose and palate, Bubble & Squeak is a NEIPA that immediately sat right near the sweet spot for one of the biggest beer trends in recent years. Indeed, it's become such a cult favourite that, although not officially a year round release, there's seldom a time you'll not find it pouring at the brewery.