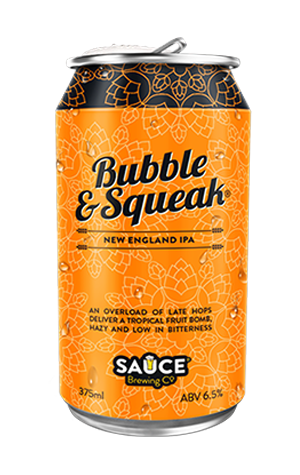 When Sauce first opened to the public in October 2017, the brewery may not have been 100 percent ready, but the beer was. Throughout the brewery’s opening weekend and the subsequent few, the beer that proved the most popular (by virtue of that most empirical verdict of being the first to be drunk dry) was a keg-only New England style IPA. So it’s little surprise they chose to bring it back again… and again… and again. It became known as the ‘special batch that’s always available’, standing tall in its black 500ml tinnie.

In September 2020, Sauce gave in to the inevitable and officially brought Bubble & Squeak into their core range. It now joins the other beers in a 375ml can, but with a strip of black at the top of the can as a nod to the old design.

Hazy in appearance and delivering an otherwise mashed up fruit melange on the nose and palate, Bubble & Squeak is one of the Aussie examples of the style that set the standard. It’s been bursting with tropical juice and low in bitterness since before most breweries were dabbling in hazy IPAs. And as well as being an outstanding beer in and of itself, it’s acted as somewhat of a playground for the Sauce brewers, who make fun variations of Bubble & Squeak whenever they get the chance.