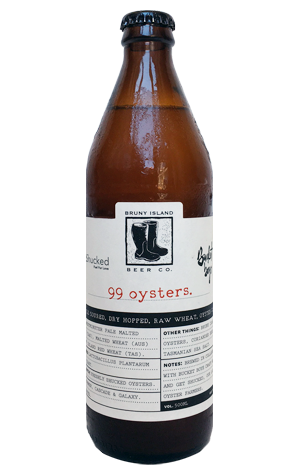 When making their rare appearances in beer, oysters tend to crop up in stouts more often than any other beer style. Yet, given their salty, briny nature, you can understand their appeal to brewers of the salty, sour gose style. That's where the brewers from Bruny Island and Sydney's Bucket Boys decided to head for their first collaboration, enlisting Get Shucked to supply 99 oysters pulled fresh from the ocean just 500m from the brewery. The bivalves came late to the piece, following a spot of kettle souring and the addition of hops, coriander seed and Tasmanian sea salt – and, boy, do they have an impact.

99 Oysters pours a hazy, pale yellow with a fluffy white head, an appearance that hints little at the experience ahead; a few years back, another frequently experimental brewer, Red Duck, released beers under the "Extreme Ale" banner and this is of that ilk. On the nose, it's salty, briny, with a touch of lemon and plenty of washed rind cheese like funk. On the palate, it's salty, viscous and has a touch of acidity. In beers of this ilk, you can be left searching for the impact of the molluscs; here, the drinker is left in little doubt as to the special ingredient.