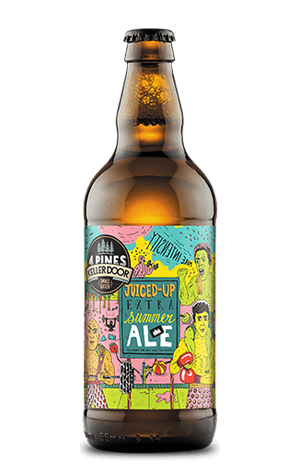 If 2017’s gamut of New England IPAs collectively raised the question of just how fruity and juice like beers can be, the release of 4 Pines’ first Keller Door beer of the year suggests the question will continue to be asked in 2018.

That said, their Juiced-Up Extra Summer Ale is no NEIPA but instead something of a mashup of styles, a beer with a light body akin to a summer ale but whose flavour profile has much in common with super fruity NEIPAs. Unlike those hazy beers, however, this has either been conditioning over summer like a dedicated beach buff or has enjoyed an intimate view of the inside of a filter as it’s about as clear you could get in the glass without a spray of Windex.

Upon pouring, the aroma comes at you with a powerful passionfruit hit – a combination of Galaxy and Vic Secret hops plus passionfruit puree – and that flavour carries on to the palate where you also pick up strawberry character (again, from a puree boost) and a dose of kiwifruit (a throwback to their limited Nitro Pavlova beer from 2017), with the last of these giving the beer something of a sauv blanc kick too. So, while the hops add a touch of bitterness, the JUESA is more a summer beer designed to deliver that sweet, sweet fruity hit.