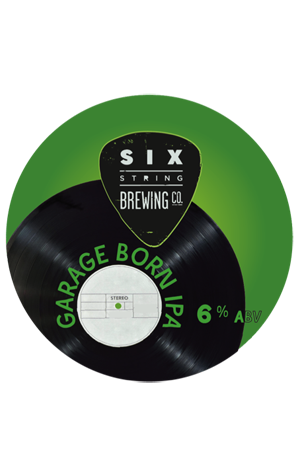 The first seasonal to come from Six String in 2018 is a literal mashup of amateur and professional brewing. Last year, they held a homebrew competition where the winner would receive the coveted prize of heading to the brewery, scaling up their successful recipe to a commercial size and having it released in cans and kegs to good beer venues far and wide.

The champion beer was a Citra dominated IPA brewed by Dan Koorey and now it's getting its time in the spotlight under the name Garage Born IPA. Ahead of its official release, word from the brewery was that it’s a beer with “a lime and mango aroma” that offers “hits of citrus and tropical fruit” character due to the substantial amounts of hopping (which included a touch of Mosaic) throughout the boil, then again in the dry hopping. It looks like they’ve aimed for drinkability in the 6 percent ABV beer too by mixing up a a sweeter malt bill, which the brewers – home and pro – say should “round out the palate and make you take another sip”.