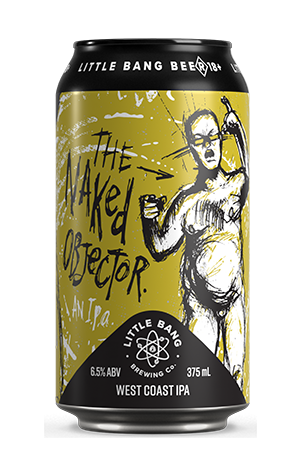 There's usually a story behind all of Little Bang's beers – or at least the artwork or names that accompany them – and often stories it's a wise idea to take in accompanied by a beer or two. One of the more colourful ones relates to Adelaide beer bar Nola who, when they were looking to launch their venue, had to put in place some additional blinds due to an objection from a chap who liked to wander nude around his neighbouring apartment. Thus the Naked Objector was born.

We're not sure how the inspiration behind the beer feels about this turn of events. But, if he's a fan of full flavoured, hop dominated beers, he's likely to approve. This Naked Objector is a West Coast IPA the brewers describe as: "Brutal, musky, obnoxious, unreasonable and bitter, yet strangely compelling..." and which, in more staid tones, we'd say offers up tropical, grapefruit, tangerine, orange and dank hop characters on the nose, is fluffy and full of body and brings some stone fruit and ripe pineapple to play on the palate, all wrapped up with a full and sticky bitterness.