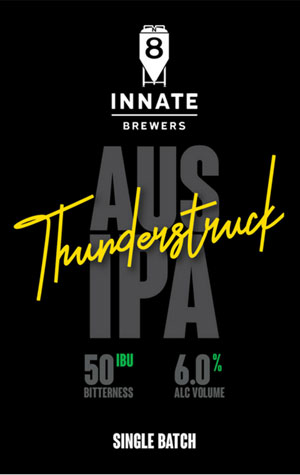 The Australian hop industry has come a long way in the past decade and the team at WA's Innate Brewers is in the mood to celebrate. They've done so with Thunderstruck, an Australian IPA that performs screaming solos and power chords courtesy of a trio of all Australian hops – Galaxy, Vic Secret and Ella – and all Aussie malt. The 50 IBU single batch release is described by head brewer Joel Nash as having “a big pineapple and passionfruit aroma followed by a round and slightly sweet malt profile”.

While it’s easy to read from this songbook, you'll also pick up some citrus – grapefruit and mandarin – on the nose and a body that’s light on its golden marmalade coloured feet. This teams with a tight carbonation and dry, bitter finish that begs for an encore.

Thunderstruck’s release follows two pop hit NEIPAs from the brewery plus a sold out world tour that took in a Québécoise Belgian Dubbel, a Belgian IPA and an Imperial Kiwi IPA. With a new brewery on the way and a dog-eared brewer’s passport set to garner many more stamps, 2018’s single batch release program looks to be very interesting indeed.