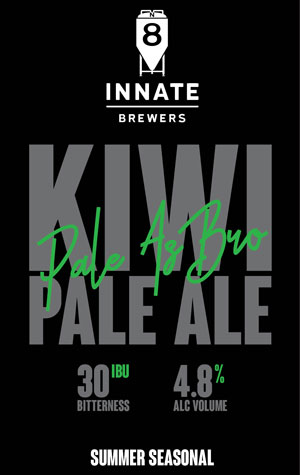 The old Chinese gooseberry tastes of passionfruit so, even before the glass has touched the lips, the taste buds can almost feel the hop influence. Maybe it takes the drinker further into Polynesia than the Shaky Isles but it wouldn’t be surprising to see a native New Zealander enjoying this beer in one hand with a Perky Nana in the other.

There's a tropical punch vibe that conjures thoughts of dancing grass skirts on deserted islands. It has a very smooth mouthfeel.

This beer was a bronze medal winner at the 2016 Royal Perth Beer Awards and is now Innate's regular Summer Seasonal release.