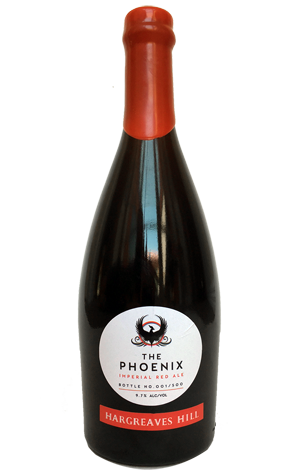 The Phoenix is the annual Hargreaves Hill tradition dating back to the brewery's rebirth after the original brewery shed was destroyed by the Black Saturday fires. Each year, it returns in weighty, individually numbered, wax sealed 750ml bottles accompanied by a handful of kegs and, year on year, it retains a spot as one of the highest rated Australian beers of all time according to online rating sites. All in all, there's a good argument for the beer being the Yarra Valley brewery's equivalent of one of the country's beer icons, Nail's Clout Stout – and not just because of its rarity, the position it holds within its brewery's lineup and the grand presentation.

While The Phoenix, an imperial red ale, doesn't pack quite the same intensity and gnarly depth of Nail's imperial stout (Hargreaves has its own R.I.S. to compete on that front), it is a beer that stands apart from the crowd in its decadence, as much when in the glass as in the bottle. It possesses an enticing deep auburn red colour and is effectively a beery brethren to similarly hued fortified wines; an after dinner beer, if you like. As for the experience, it's awash with rich, luxurious malts underlaid with piney, spicy hops, some welcome booze characters and a balancing bitterness. A delight worth hunting down if you've not already.