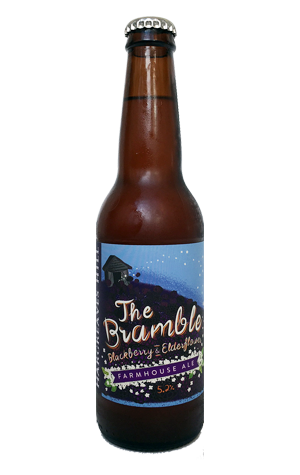 Those of you with decent memories may recall past Hargreaves Hill collaborations with Red Hill going under the Two Hills banner (there was a cracking Maibock at the first ever GABS at The Local Taphouse in February 2011, for example). So does this count as the Two Graves?

Either way, The Bramble represents a coming together of one of Victoria's long established breweries with one of its most talked about (and hardworking) newcomers. And not only have they brought their own particular skills to the brew deck, they've brought a little of their respective locales too: blackberries from the Yarra Valley and elderflower foraged by the Sailors Grave team in East Gippsland.

They've been added to a farmhouse ale base, with the former lending the beer that hazy pinky-peachy colour that's becoming rather ubiquitous in these fruitiest of days as well as soft berry aromas that sit alongside sweet malts and some farmhouse esters. Flavours are of the peppery, floral, perfume and spicy kind but the defining character on the palate is its dryness, apparent from the first mouthful and gaining momentum as it goes.