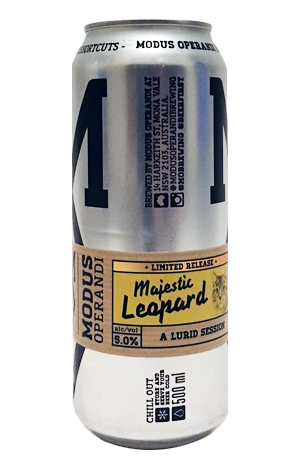 Modus Operandi continues along the path it has been treading – or perhaps in this case, prowling and pouncing – in recent months with another beer that's all about the hops and the haze. Majestic Leopard – complete with image of rather timid looking pussy cat on the label – is "a little beer that wants to be bigger", according to the brewery, which is also tagging it a session ale, even at 5 percent ABV.

What you get from its cloudy goldenness is a kinda creamy, hop led texture, rounded on the nose and on the palate and, thanks to a combo of Mosaic, Eukanot, El Dorado and Vic Secret, with plenty going on. Modus is going with "jammy apricot, fresh calypso mango and drippy pineapple" while you could add peach, coconut, stonefruit and even something a little nettle like. Bitterness is restrained, although there's a wee resinous kick if you go looking for it. Like a majestic vegetarian leopard hunting down its fruity prey.