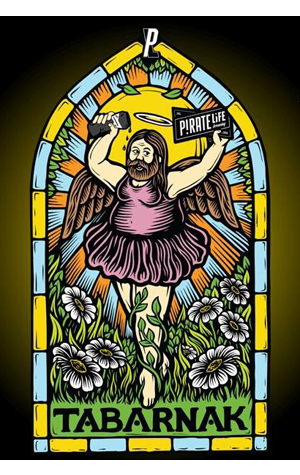 When it comes to collaborations, Pirate Life have always been happy to look outside the box and their latest offering is no different: Alfonse Ale is brewed in collaboration with the Canadian circus troupe Cirque Alfonse. In 2017, Pirate Life provided the kegs used in the troupe's juggling routine at the Adelaide Fringe Festival. With the circus stars returning to the festival in 2018, the Pirates decided to welcome them with a beer brewed in their honour.

The style brief for the beer was provided by the Quebec crew, one upon which Pirate Life put their signature "hopped up" stamp. Essentially a merger of two Pirate Life beers, Alfonse features the malt bill of the single hop Mosaic IPA and the hopping schedule of their core Pale Ale. Thus, it's a lot paler in colour than the latter, with aromas of hops, hops and more hops crawling from the glass and filling your immediate surrounds. Grapefruit and tangerine flavours are the driving force behind the beer, while a medium weight mouthfeel eases you into a discerning bitterness and dry finish.

This is an SA only exclusive release, pouring throughout the duration of the Fringe.