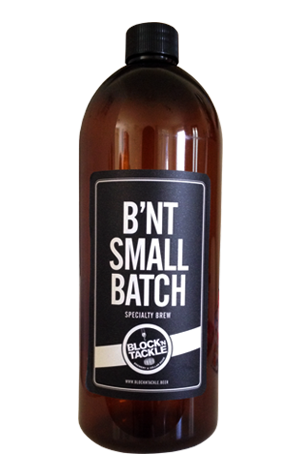 Before the arrival of summer, the guys at Block ’n Tackle decided to add something extra to their range; something hoppy and full flavoured but light and quaffable too. The something they settled on was an XPA.

In keeping with the brewery’s nautical theme, the beer was called Scud (the ship from which it takes its name is famous for mysteriously disappearing off the Central Coast back in the 1850s) and it very quickly found favour with locals who downed every last drop in record time. So they brewed it again and the same thing happened until, by the end of summer, it had become a bona fide best seller.

In terms of makeup, they’ve toyed with punters a little by alluding to using seven hops varieties while simultaneously electing not to name them – though we can at least say that two of the most prominent are Mosaic and Galaxy, which ought to give the more knowledgeable beer enthusiasts some idea of the area in which the beer sits. The aroma isn’t a straight out tropical fruit salad as it carries a pleasing floral bouquet which invokes a certain softness and preludes the action on the palate. There, the summer fruit characters duly shine through and they’re aided by a touch of something else – a subtle herbal element, even cucumber – which adds an extra element of interest.

Despite the beer’s overall emphasis on hops the bitterness is considerably restrained, meaning a touch of sweetness is able to linger. When combined with the decidedly pale appearance it certainly hits the original brief so it’s no great surprise the beer became as popular as it did. While the Scud’s success hasn’t quite yet been enough to convince the brewers to add it to the permanent range, as long as the warm weather holds out, there’s a good chance you’ll find it on tap at the brewery.