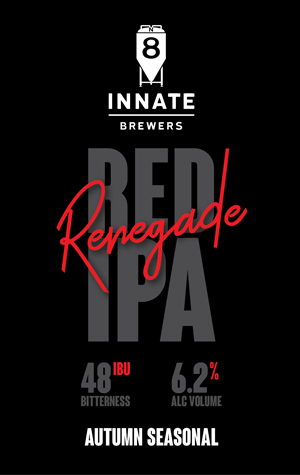 For small batch releases, many in the beer world race to embrace the modish, while others use the opportunity to celebrate archetypes of the 30 year journey taken by modern beer. Autumn’s arrival sees Innate Brewers drawing from the latter in releasing a classic red IPA that steers clear of juicy hops.

Head brewer Joel Nash is no laggard when it comes to the former, as two recent NEIPAs and a soon to be released XPA prove; however, the Renegade Red IPA offers a moment to pause from the entropy, much like catching up with an old mate to find the world seems to make sense again. Pale, Munich and CaraMunich malts serve as the foundation for a classic combination of Simcoe and Amarillo at the dry hopping stage. The result is a delightfully old school beer that arrives deep red with burnished ruby highlights, loaded with caramel and biscuit characters and a firm 48 IBU bitterness that leads to a dry, piney finish.