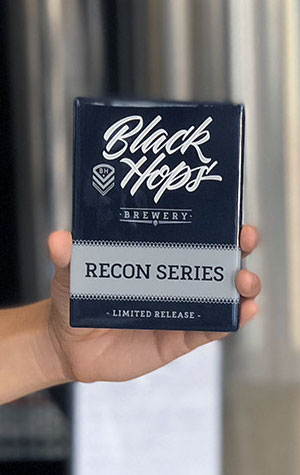 The Negroni is not a new drink – it was invented almost a century ago; James Bond drinks it in the 1960 short story, Risico, and Italian restaurants have been serving it as an aperitif for years. But the past decade has seen it burst into the public consciousness (perhaps its impressive red colour helped made it Insta-famous too), and we’re all the better off for it. It’s equal parts gin, Campari, and sweet vermouth, and equal parts refreshing, surprising and impressive – not to mention a favourite after hours of many an Australian brewer.

Black Hops has taken inspiration from this classic to make a small batch beer in their Recon Series of limited run releases, the Negroni IPA. They’ve added juniper berries (the dominant flavour in gin) and chinotto (Italian bitter oranges, the dominant flavour in Campari), plus giving it some contact time with French oak, to make a beer that’s reminiscent of a Negroni while being more approachable to the uninitiated. The fruity hoppiness carries the orange and herbal flavours onto the palate, with the bitterness from the chinotto waiting until the finish to hit you. Orange peel garnish optional