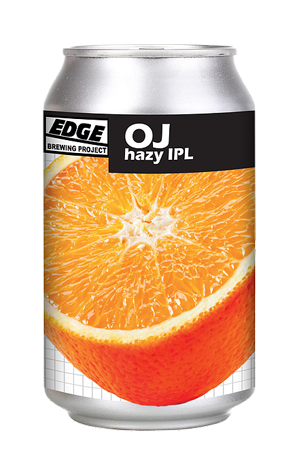 To the ever-expanding world of hazy, New England IPA style beers comes a new addition from Edge Brewing Project. In keeping with their ethos, it's not an IPA(le) but an IPL(ager), albeit one that looks to reach to a similar end point via slightly different means.

To create OJ, they've loaded the beer with hops known for their tropical characteristics and added a stack of navel oranges from SA's Riverland region. The outcome is a beer that's, unsurprisingly, fruity as anything: orange and mango, candied lemons and pineapple abound, while there's an acidic tang, not to mention a zestiness on the palate. The use of a lager yeast keeps it tighter than many NEIPAs out there, while a slightly higher bitterness than is typical for such beers adds balance.