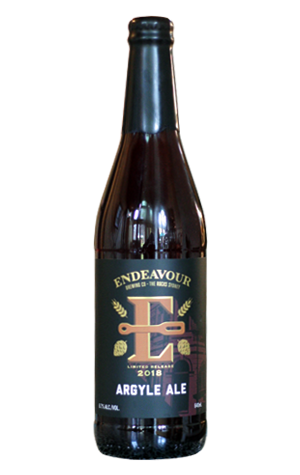 It’s been a year since the little brewery at the Endeavour Tap Rooms was fired up for the first time. To celebrate the fact, they’ve revisited one of the first new beers they put through the system: the Argyle Ale. That one, the 2017 edition, was an English strong ale but for this year’s version they’ve gone stronger still, moving into barleywine territory.

Behind the scenes this beer was a bit of a brewer’s workout, requiring a mini mountain of malt to be hauled up ladders and tipped into the lauter in order to achieve the kind of full bodied beer they were after. That in itself isn’t actually too dissimilar to how the 2017 version came about, but this year’s has a major difference in that it spent a few weeks fermenting with port-soaked oak chips. Both those sweet port and wood characters come through with gusto on the palate making it a robust sort of a beer that you’ll find well suited to sipping (at 8.7 percent ABV sipping is an advisable approach) and enjoying as it warms and the sweet flavours are drawn out further.

The 2018 Argyle Ale was only a small batch but they hand bottled a portion of it for posterity and so that it can be enjoyed alongside the 2017 version – and, you’d suppose, the 2019 when it eventually comes around.

On the same evening they launched the Argyle, Endeavour also tapped the first of its Double Stacked IPA, essentially a ramped up version of the IPA you’ll usually find on tap at the brewery. To give a direct comparison, it’s a little maltier, a little sweeter, a little darker, has a little more body and is a whole lot hoppier. At 8.0 percent ABV it’s in the same territory strength-wise at the above Argyle Ale but it drinks in a completely different way; the oaked barleywine demands slower and more considered consumption while the fruitiness and extra effervescence of the DIPA makes it more classily balanced and quite dangerously drinkable.