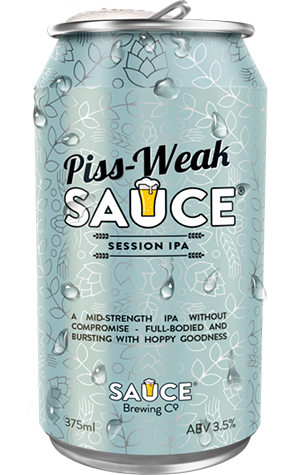 Having been a keg only release since the day the brewery opened, Sauce’s Piss-Weak session IPA made a move into cans to test itself out in the wider but sometimes watery world of the mid strength market.

The name itself sits somewhere between irreverent, self deprecating, crass and amusing. So it kind of naturally lends itself to a certain market appeal, one that – if we’re honest – is a bit blokey and characterised by a liberal use of colloquialisms. There’s actually a precedent in this field: Melbourne institution The Great Britain Hotel used to take pleasure in serving up pints of Piss, a house lager, and Piss Weak, a lower alcohol version; since its former owners moved down the road to The Cherry Tree in Cremorne, you can find Piss there instead.

Stripping the label off Sauce’s version, what you’re left with is a beer that shows an impressive amount of flavour and body for something that comes in at a mere 3.5 percent ABV. To become that way, Piss-Weak has been dry hopped up the wazoo with Citra, Galaxy and Zythos varieties that give it a whole heap of citrus character and a level of bitterness not matched by some beers almost twice its size. While it may have become a kind of default description for any beer that describes itself as a session IPA, in this case it really does feel like a beer that punches above its weight.