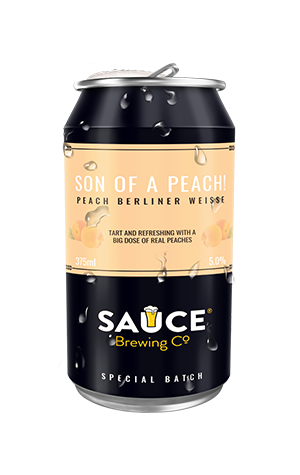 At many breweries these days, usually somewhere towards the end of a bank of taps, you’ll find something that fits under a loose umbrella description of: “For people who say they don’t like beer”. In the past, that’s generally been a cider but, increasingly, what’s been offered is a kettle soured ale, often boosted with some sort of fruit addition. Summer seems a particularly popular time for these beers to emerge due to their light and refreshing nature, the warm weather and an abundance of fresh fruit with which to bastardise the beer.

Throughout their first summer at their brewery, the Sauce brewers had played around with several one-off recipes on their pilot brewing system and one ended up, perhaps by default rather than design, their least beery beer: a Berliner weisse made with the addition of peaches they called Son Of A Peach. More importantly, it proved pretty popular, certainly popular enough that they figured it warranted being produced on a larger scale and sent out into the world.

The one that’s made it into cans is not exactly the same as the one first seen and tasted in the tap room. It’s a more refined affair; not quite as hazy, a bit leaner and – most importantly – not so cloying. Dialling back the peachiness a touch feels like a reasonable decision as it seems to strike a better balance between the fruitiness and the acidic and dry character that, in the end, are the heroes of the beer. Whether it’s too sour, too peachy or not enough of either will depend on your own palate, but on balance you’d have to say it delivers exactly what it says on the tin.