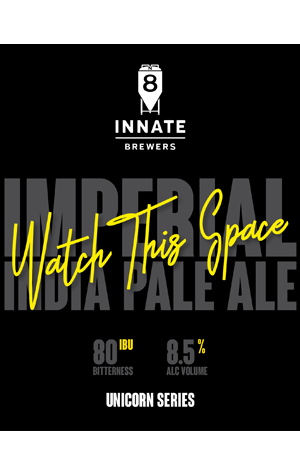 Innate's double IPA Watch This Space returns accompanied with the accolades and hype of the little brewery that could. Last year, the beer won gold at the 2017 ABIA and Perth Royal Beer Show awards as well as being the fastest selling beer in a number of Perth venues.

It’s with this track record / pressure to deliver that the 2018 version hits Perth venues as the final beer to be brewed on Innate's old brewery kit. It means, while head brewer Joel Nash is busy assembling his new toys, drinkers will be enjoying a large but elegantly balanced Imperial IPA.

Golden marmalade in colour, with a little haze, you'll pick up a variety of citrus – notably grapefruit - mango and papaya elements, courtesy of Citra, Chinook and Columbus hops. It’s viscous without being syrupy with the 8.5 percent ABV bringing warmth alongside a perceptible pepper character and a dry finish. The fruity ride is anchored by a dank resinous quality in what's quite a send off for the kit that launched the brewery. Given Joel has cracked out beers of this calibre on the most basic and manual of setups, we look forward to seeing what he delivers when the new one is up and running.

Draught only at select WA venues