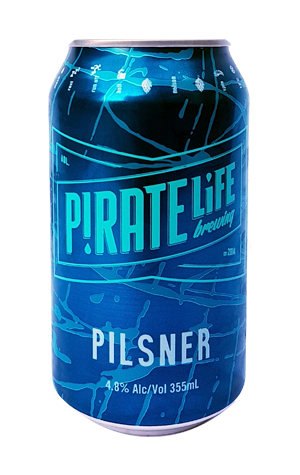 The brewery may have built its reputation upon a series of acclaimed hop forward ales, yet the appearance of this Pilsner amid Pirate Life’s canned lineup shouldn't come as too much of a surprise. As well as last year's Stout and the odd barrel aged experiment, they've put out a few pilsners in draught form over the past couple of years.

This one is the beer you may have seen on tap as Nelson Pilsner, so named as it's a single hop pilsner featuring Nelson Sauvin out of New Zealand. It's a popular and often hard-to-source variety and one they'll continued to use in the Pilsner when tank space is available. Indeed, according to the Pirate Life brewing team, a combination of a lack of tank space and the need to give this beer a lengthier ferment than their ales is, in part, why it's taken a while to put such a beer out widely and in cans.

Those who fell for Pirate Life because of the brewery's mastery of American hops may not find what they're after here, but that's not the intention. Sure, there's no shortage of hops but they provide floral, melon and spicy aromas and flavours rather than anything overtly fruity and piney. Very bright in the glass, with a luminous golden colour and distinctive Pilsner and Carapils malt aromas, it possesses an assertive and lasting bitterness and the sort of dry finish that lends such beers their moreish appeal.