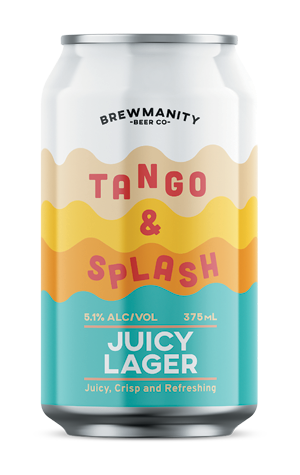 If you ever spent a Friday night at home, back when you could count the number of Australian television stations on one hand, chances are at some point you caught at least some of Tango & Cash. The buddy cop movie saw Sylvester Stallone and Kurt Russell team up to defeat drug lords in a story that’s pretty much indistinguishable from countless other 1980s blockbusters.

So what does that have to do with Brewmanity’s new beer, other than lending it the name Tango & Splash? Well, the best buddy movies tend to be good at one thing above all: bringing together competing characters and making them work together.

And that’s the case with this lager, in which Brewmanity’s founder David "Neita" Neitz and head brewer Mick Jontef sought to brew a beer was hop forward enough to be considered juicy while retaining a lager’s crisp and clean characteristics. Those two elements are quite clearly there, with a tropical fruit aroma soon giving way to a largely familiar lager profile. Then, before the end credits roll, those tropical flavours reappear – melon and passionfruit the most prominent – and, with most of the hops added towards the end of the boil, there’s little bitterness, with the hop aromatics of hops left to do their thing unhindered.