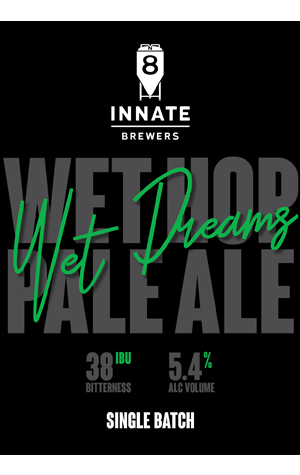 Outright laughter. This isn’t getting any better.

I’m sure the novelty will wear off as the kegs drain but, as one of the first punters to try their new wet hopped pale ale, it would appear Innate Brewers have created one of the more awkward beer moments in recent memory. Beyond the cheeky name, Innate have combined a relatively simple base beer that allows the freshly harvested wet hops from WA's Preston Valley Hops to come to the fore but in a more subdued manner than might be expected. Head brewer Joel Nash noted in a recent Crafty Pint article about such beers that “when people see my beer is a wet hopped beer, they’ll assume it’s a hop bomb but it’s not.”

Instead, the delicate flavours from the 10kg of fresh Nugget and Cascade hops showcase ephemeral pine and citrus flourishes and a building herbal bitterness that lingers more than Joel's comment would suggest.

Wet Dreams is available as a limited draught release from select WA venues.