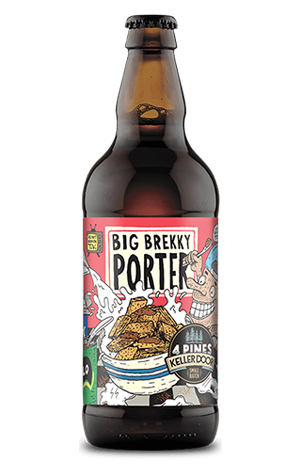 Shaking off the shackles of the gold hued fruity ales that define summertime, 4 Pines has slipped into something a little cosier as we slide towards the cooler seasons. Big Brekky Porter is the latest limited edition addition to their colourful Keller Door series, although keen observers (and early starters) may note it’s a beer they've poured before in small batches at their brewpub, starting back in 2015 when it was made for a beer breakfast during what was then Sydney Craft Beer Week.

Being a porter at heart, it’s no surprise to find some dry roast and bitterness, but they're only a small part of the story – this is a beer that’s utterly rampant with chocolate malt, while the addition of lactose gives the beer a deliciously sweet side. If it ends up reminding you of a glass of Milo poured over a bowl of Weet-Bix, that’s exactly what the brewers were thinking when they made it.

The only thing keeping this away from your kids during their most important meal of the day is the little boozy hit you get from its 7 percent ABV, but even that retreats rapidly as it warms, vanishing beneath a sweet sensation and creamy feeling. If you’re a fan of sweet milk stouts, you’ll be in comfortable company here.