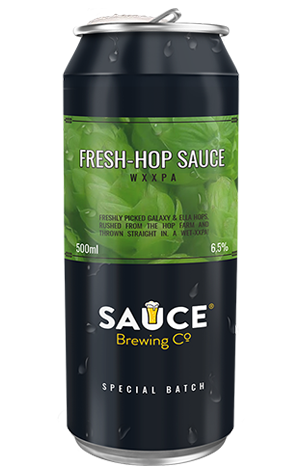 As fate would have it, on the day of an unscheduled visit to the Sauce brewery the brewers were midway through making their second fresh hop beer of the 2018 hop harvest season. The first had been and gone a few weeks prior, just a tiny test batch made from the scrawny hops that’d grown out in their beer garden. This next beer was on a different level. Peering into the steaming stainless steel cauldron and seeing it stuffed with hop bags brought to mind laundry day after an extended camping holiday – the thing was rammed.

Despite the intrinsic romance attached to the bounty of the harvest, brewers often grumble about what a difficult prospect brewing fresh hop beers can be. Because they rapidly decline in quality and/or character once picked, fresh hops are dispatched to brewers as soon as they are plucked from the bine, before any lab analysis can be done. By the time they get their delivery, the brewer doesn’t know precise levels of oils or acids so the recipe they make will often contain a degree of guesswork. Some brewers deal with it by making a maltier beer and letting the hops add a little flourish. Others might build off a light malt base and let the hops just be what they will be. Sauce’s beer was a gamble tilted towards the latter.

They’ve called it a Wet Hopped Double Extra Pale Ale, shortened to WXXPA and, at first, it doesn’t appear any different to a “regular” beer, with its pretty golden glow. And it’s plainly a hoppy beer – tens of kilograms of fresh Galaxy and Ella hops will do that – but it’s not outrageously hoppy in a way you might expect, as in a riot of passionfruit. Yes, you do get a little of that tropical fruit feeling but it’s more about fresh cut grass characters, a slightly earthy or herbal tinge and an oily or resinous mouthfeel. With that subdued hop character you might, perhaps, expect the bitterness to be more prominent, but there’s actually very little.

The result is that this Fresh-Hop Sauce is something quite different to most other pale ale/IPA/XPA variants, something quite unique to this time of year and, most importantly, rather delicious.